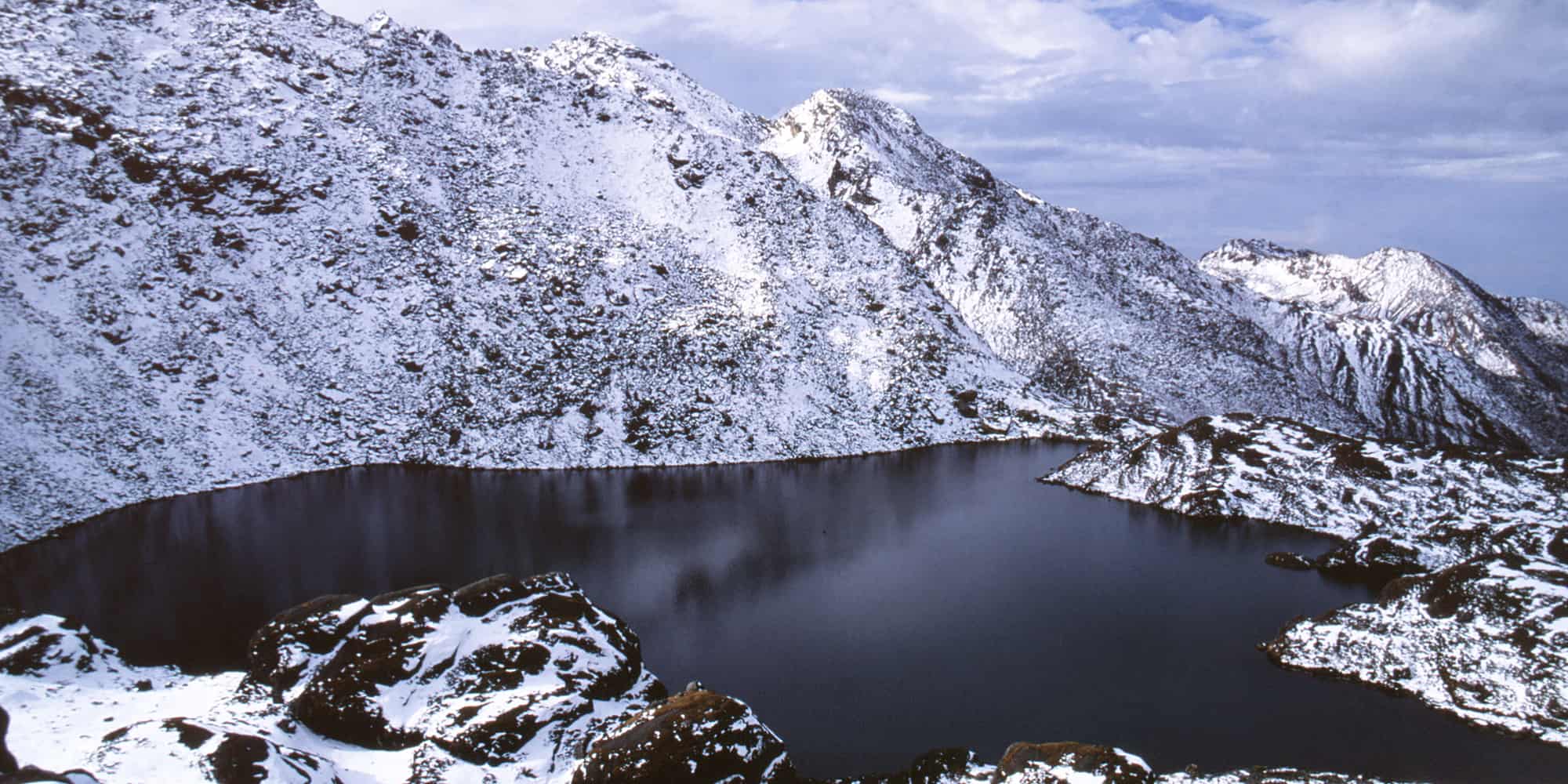 A trek to the abode of the Gods!

To the north of Kathmandu is pure Himalayan magic, Gosainkund Lake. Traditional cultures, great views, well maintained trails, plenty of wildlife, sacred lakes, rarely another trekker in sight. Plus one of the best wildflower displays in Nepal during the spring season.

When to Trek to Gosainkund Lake?

To trek out of the Kathmandu valley to Gosainkund Lake is a step back in time, to an age when all expeditions started from the valley rim. The feeling of walking away from Nepal’s capital is unique and it allows you to ‘grow’ into the trek. Once over the rim, you head for a mountain range that fills the horizon. To the main north–south route a series of interconnecting trails from the east and west offer an opportunity to trek to your heart’s content.

Gosainkund Lake tends to have a long trekking season from early October through to mid-February, and then re-opening in March until the monsoon begins in June. However, snowfalls are very common on Lauribina Pass throughout the year and trekkers should be careful not to become isolated on the higher trails. A major highlight is the magnificent rhododendron forests that bloom throughout April across the southern boundary of the National Park.

Established in 1976, Langtang National Park has a reputation for being well managed, where locals actively help to maintain park biodiversity and ecology. Human impact is limited but not absent as grazing is allowed in high pastures and permanent communities are permitted to exist in the heart of the Park.

As at August 2019, Rasuwa District (Tamang Heritage Trail) has a trekking permit of US$10 per person per week. Plus the Langtang National Park entry fee of NRs 3000 per person (foreigners), NRs 1500 (SAARC nationals) and NRs 100 (Nepali nationals).

Although it’s a long hike of nearly 3 weeks, it is possible to connect Gosainkund Lake with the holy lakes of Bhairav Kund and Panch Pokhari in the east of Helambu. However, you should be aware of sudden storms that can occur throughout the year. Storms and rough trails never deter the thousands of pilgrims who visit the lakes during the monsoon months. If you have the time, consider a one-day side trip to the summit of Shivapuri and spend a night watching the twinkling of Kathmandu’s city lights beneath a heaven full of stars.

Multiple daily bus services run from Kathmandu to Chisapani, Melamchi Gaon, Dhunche and Syabrubesi. An extensive new road network is under construction throughout Helambu and will include a Melamchi to Trisuli road via Kutumsang. All these roads are causing a great deal of forest damage and are unavoidable whether trekking east–west or north–south across the region.

How Much does the Gosainkund Lake Trek Cost?

To help you budget and plan, we’ve made a comprehensive costing explanation on How Much Does the GHT Cost? But here’s a simplified breakdown.

Do you have any questions about costs? Please Get in Touch for more details.

Want to do things a little differently? Maybe take some extra time, or go a bit faster? Or avoid technical sections or combine with other trails? Every GHT trek is different and that changes the price, but please feel free to Get in Touch to ask questions and how to customise your own trek.

Please note that www.greathimalayatrail.com does not handle bookings for treks. We are here to inform you about the trails and logistics, but you will need to book through a registered trekking operator in Nepal. If you would like an operator recommendation or feedback on a company you are already talking to, then please Get in Touch.

Your Impacts on the Gosainkund Lake Trek

Gosainkund Lake is a low impact trek for the solo hiker with moderate social impacts and relatively low GHG and waste impacts.

Consider taking a little extra time to explore side trips or stay a little longer to improve your social impact.

Consider taking a little extra time to explore side trips or stay a little longer to improve your social impact.

A high social impact is from having a camping crew who will buy local products  and services, but it increases your footprint.

Despite the good social impact, it is hard to justify camping on this trek.

For more information about social, Green House Gas and waste impacts of treks, see The Impact of your Trek.

To the north of Kathmandu is pure Himalayan magic – traditional cultures, great views, well maintained trails, plenty of wildlife, sacred lakes, rarely another trekker in sight and one of the best wildflower displays in Nepal during the spring season. 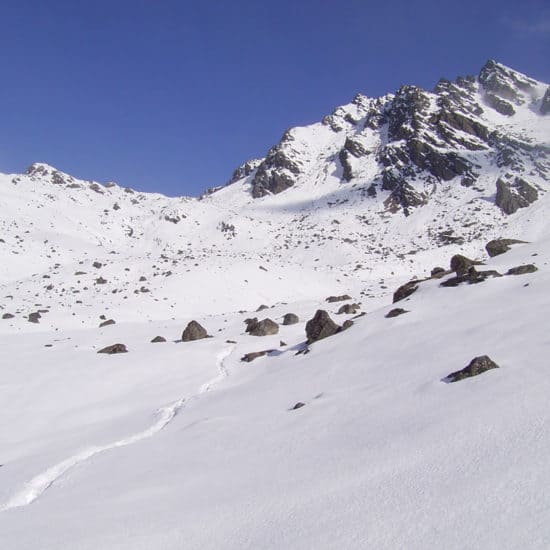 From the centre of Kathmandu, catch a bus to Chisapani via Sundarijal (1460m), where you need to register at the Shivapuri Nagarjun National Park post (1600m). There are views of Shivapuri (behind) and Himalayan peaks (ahead) from along the ridge-top road as it passes through an oak forest to the teahouses of Chisapani (2215m, 1½hrs).
2

The trail is the same route as a new road project and continues down a pronounced ridge to a saddle at Pati Bhanjyang (1770m, 30 mins) and then climbs to a fork where you should take the left-hand trail to another saddle called Thankune Bhanjyang of a similar height. The trail then ascends an easy gradient before steepening to switchbacks and arriving at the village of Chipling (2170m, 2hrs). A final climb to the top of the Manjyu Danda ridge (2455m, 1hr) brings you to a large chorten, teashop and a good viewpoint of the mountains to the north. Descend for 45 minutes to the saddle village of Golphu Bhanjyang (2130m), where there are some teahouses and a camping ground next to the school if you cannot face the next climb. The trail continues to climb a ridge to the north, take the larger track at each junction, until you reach another saddle and the Sherpa community of Kutumsang (2470m, 1½hrs). There is a Langtang National Park office here; you will need to show your Park receipt as well as register your details.
3

Water can be hard to find in dry months on the next section of trail so carry a good supply. Continue up the eastern side of a ridge that climbs from Kutumsang, first through oak forest and then through an impressive forest of red-, white- and pink-flowered rhododendron. The gradient eases and from grassy meadows there are good views of the broad lower valleys and Shivapuri behind you. The trail steepens again as you climb a gully before arriving at Kyuola Bhanjyang (3220m, 3½hrs) where there are some teahouses. The trail descends a little before climbing an easy gradient to Mangengoth (3390m, 30 mins), which has a few teahouses and a large campsite surrounded by rhododendron forest.
4

The trail follows the undulating ridgeline north through dense rhododendron forest until it climbs to the hamlet of Therapati (3510m, 2hrs) and a major trail junction where you must go left (right descends to Melamchi village). There is frequently snow covering the trail from here to the pass during the spring season, which could slow your group considerably. It is also important to note that you are now at a height where many people feel the effects of altitude so you may want to stop and rest for the night. If you look ahead it is possible to see the trail slowly ascending as it traverses through forest and then rocky hillside to the few teahouses and small campsite at Ghopte (3530m), which is 2½hrs away.
5

Most trekkers now stop at the teahouse and campsite at Phedi (3630m, 3hrs) as it makes acclimatisation easier and you have the chance of reaching Lauribina Pass (see p000) while the weather is still relatively clear. Attempting the pass from Ghopte is a long and strenuous day and means making the crossing in the afternoon when clouds often obscure the view. The climb to Phedi is along a well-established trail but the rocky terrain can be hazardous in snowy conditions. There are also a couple of waterfalls that need to be crossed and these are normally frozen in the mornings.
6

From Phedi climb a rough trail past a chorten and up into a valley dominated by Surya Peak to the north. Cross a wet or icy section of trail before ascending a series of easy slopes as you approach Lauribina Pass (4610m, 4hrs). The pass is a broad saddle between the lower slopes of Surya Peak (to the north) and Chhyarkung Chuli (to the south) and connects with a complex series of shallow valleys to the north and north-east. Each valley has at least one small lake and as many of them are sacred they each have a name. From the pass descend into a valley past a couple of small lakes, and then over a slight rise where you can see the holiest of the lakes, Gosainkund (4380m, 1hr). There is a Shiva shrine beside the lake adorned with bells to deter demons, as well as some spacious teahouses. If you have time climb the slopes of a rocky hillside to the north for good views of Surya Peak and the lakes.   The legend of Gosainkund Thousands of pilgrims gain merit by circumambulation of and/or bathing in the lake on the full moon in July and August. There are many legends concerning Gosainkund, perhaps the most famous involves Shiva, the Hindu god of creation. It is said that the gods were once churning the ocean, hoping to obtain amrit, the water of immortality. However, they extracted a burning poison that Shiva, in an effort to save the gods and the world, drank. This made his neck blue and the burning sensation forced him into the mountains to find something soothing to drink. He struck his trident into the ground and three streams poured forth, creating Gosainkund. Shiva drank from the lake and quenched his thirst. There is a rock in the centre of the lake that resembles a Shiva linga, the sacred symbol of Hindu creation, and pilgrims often say they can see Shiva reclining on a bed of serpents in the lake’s water.
7

An exposed trail from Gosainkund first traverses beneath and then climbs a ridge that heads westwards. Cresting the ridge brings you to a minor pass (4165m, 1hr) and a series of chorten. You can see the ridge descending to a collection of teahouses at Lauribina (3900m, 1hr). There are good views of the Langtang range to the north-east and the Ganesh Himal to the north-west. From Lauribina continue on the southern side of the ridge on a large trail, which enters rhododendron and then pine and fir forest. The trail switches to the north side of the ridge and continues through a forest that locals believe is haunted. After 1½ hours the trail switches back to the southern side of the ridge and then descends to the village of Shin Gompa (aka Sing Gompa, 3150m, 30 mins) where there are teahouses and campsites.
8

The trail descends rapidly through an impressive forest all the way to the Trisuli river (2000m, 2½hrs), where there is a great spot to soak your feet in the river. Cross a bridge to the south bank and continue on a slightly undulating trail that leads to Dhunche (2030m, 1hr) where there are teahouses and transport services to Kathmandu. 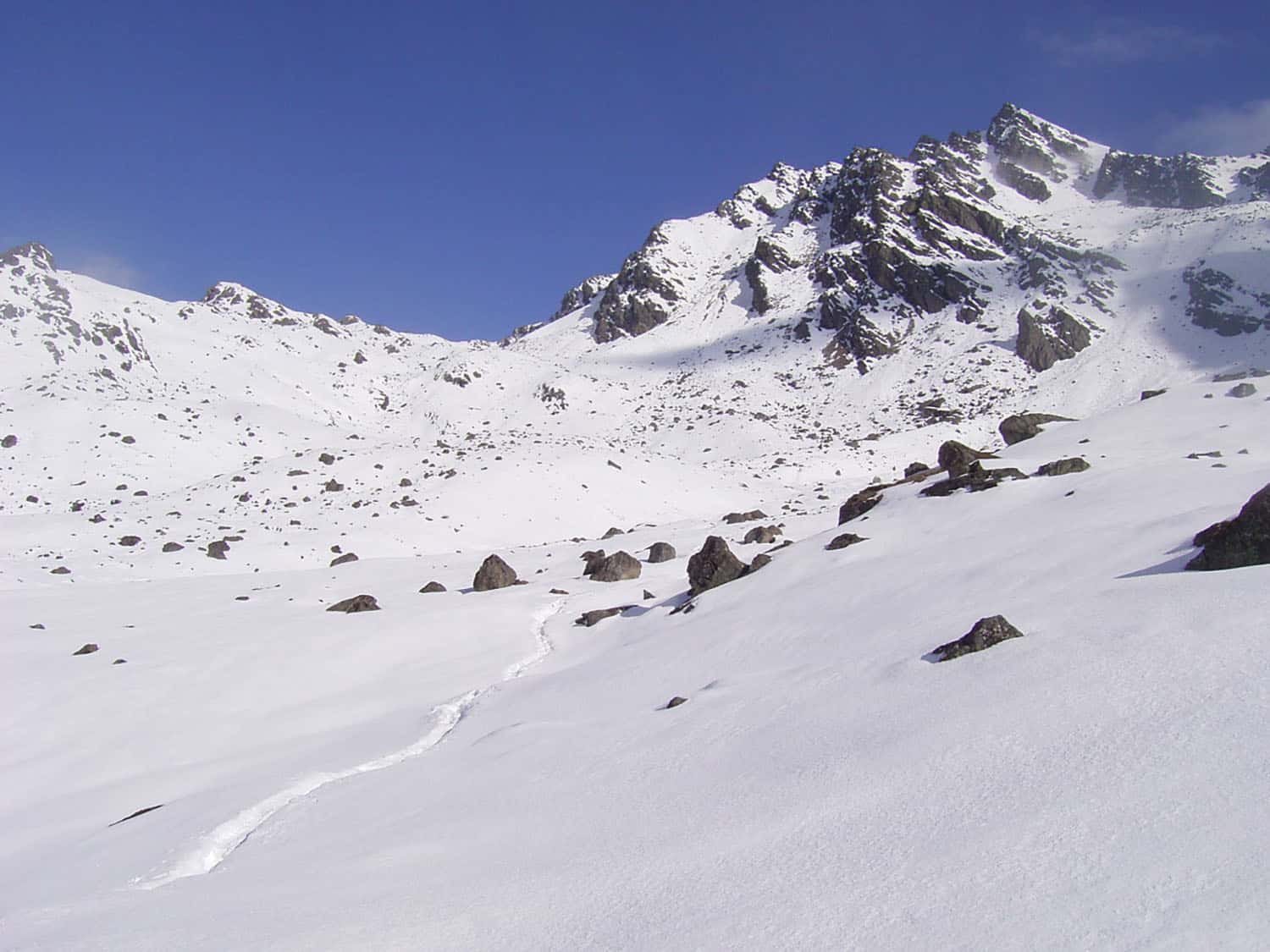 This is the 3rd edition published by Trailblazer (UK) and is the only comprehensive route and planning trekking guide to all major trails in Nepal and the Great Himalaya Trail.