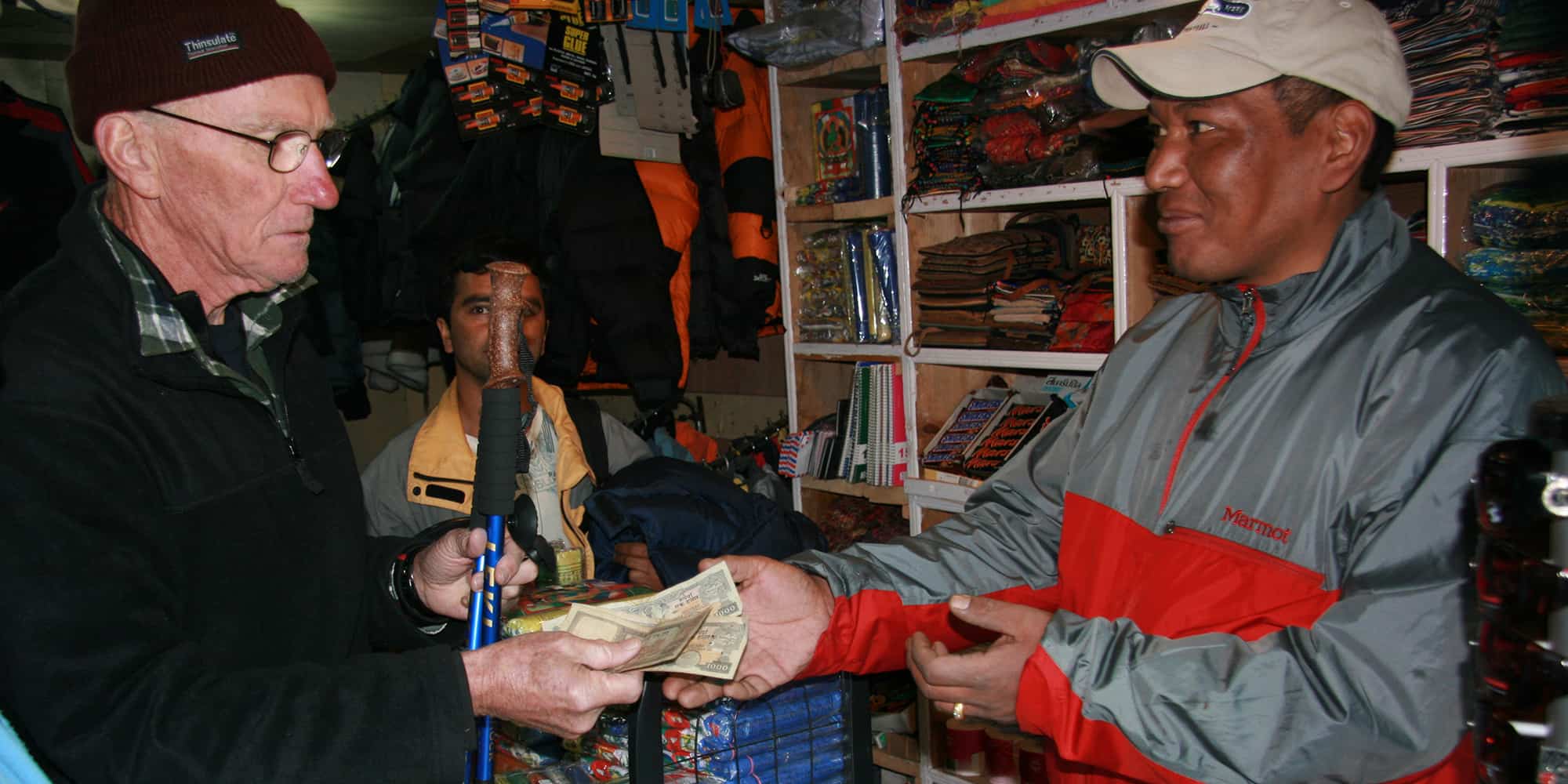 How to Bargain and Tip

The best price always comes with a smile

Money issues like how to bargain and tip, as well as the payment process are perhaps the most common complaints tourists have when visiting the Himalaya. This need not be so when you understand a few simple principles.

Firstly, you are a visitor, so you are perceived to be much wealthier than the majority of locals that you will meet. To give you an idea, the per capita income in Nepal is only US$1012 (UNDP 2018 estimate). Traditionally, a wealthy person travels in Nepal with an entourage of family, servants and assistants, so there is an expectation that you will do the same. This expectation is reinforced when you see all the support that comes with a trekking group. The simple fact that you are travelling in Nepal, and it is very difficult for a Nepali to travel in your country, probably exacerbates the perceived wealth divide.

It is perhaps no surprise, therefore, that the government charges a higher price for entry to places of interest for tourists than for locals. Also, when shopping, you will begin most negotiations with a seemingly outrageous amount being quoted by the vendor, which is just a ‘water-test’ and all part of the process.

We’ll look at how to bargain and tip separately, but you’ll see that there is cross over. Especially when it comes to keeping a good sense of humour throughout the process!

When you are out in the hills you should always confirm prices before accepting a service or product. Some teahouses may even charge you for sitting in a dining room, especially if you do not order something from their menu. Check if there is a room surcharge if you choose to eat elsewhere.

For information on how important your money is to local communities, see The Impact of Your Trek.

Bargaining can be a harrowing or fun experience depending on your expectations. The entire process is as much about the vendor and purchaser getting to know each other as it is about actually buying something.

A major complicating factor in making a purchase is ethnicity. Some ethnic groups do not negotiate at all; they just offer a fixed price, whereas others enjoy a good haggle. The best way to find out what to do is to be relaxed, start haggling, and if the vendor won’t move on the price, make up your mind if you are happy to pay that price, or to move on.

Some Tips to Make Haggling Fun

Trekkers in a camping group are less likely to buy soft or alcoholic drinks and snacks along the trail, whereas teahouse trekkers have such luxuries within temptation’s grasp reach everyday. Prices vary dramatically; in the first days of a trek a bottle of soft drink may cost US$1-2, but in the highest teahouses it may be US$5-6. Beer, chocolate and luxury snacks are more expensive.

For many tourists the tipping process either in Kathmandu or at the end of a trek leaves them confused and sometimes feeling offended. However, tipping is a traditional part of Nepali life and a vital component of a local’s income. Tipping is therefore expected and you could seriously offend if you do not tip. The big question is: how much?

Tipping in restaurants is normally 10%, but this is now optional in tourist restaurants, which, as per union demands, add an automatic service charge. Your bill must specify if the service charge has been included. Nearly all local restaurants, that is, those out of the main tourist areas, will not add this surcharge, so pay a tip as you see fit.

Trek Tips for Your Guide and Crew

Tipping your staff at the end of a trek is more complicated. A general rule is US$1 per day for a porter or kitchen crew, US$1.25 for sherpa helpers, US$1.50 for your cook and US$2 for your guide. However, these amounts depend on the duration and difficulty of your trek, how well the crew as a whole has performed and individual performance. It is reasonable to increase or slightly reduce tips for each crew member. But tell them why when you give them out on the last night of your trek. You should put tips in individually named envelopes. Your crew won’t open the envelope immediately as it is considered rude to do so; they’ll just put the envelope in their pocket and say ‘thank you’.

It is therefore important that you have sufficient cash for your general expenses and tips before you start the trek. You’ll need to take a mix of rupee note denominations (make sure the notes are in good condition) with you for the trek. It is very difficult to get additional cash in remote mountains!

We hope you’re now feeling confident with how to bargain and tip?

If not, or if you have some questions, please Get in Touch. Now it’s time for some tips about Security and Communication.

Go to Security and Communication
Was this article helpful?
YesNo