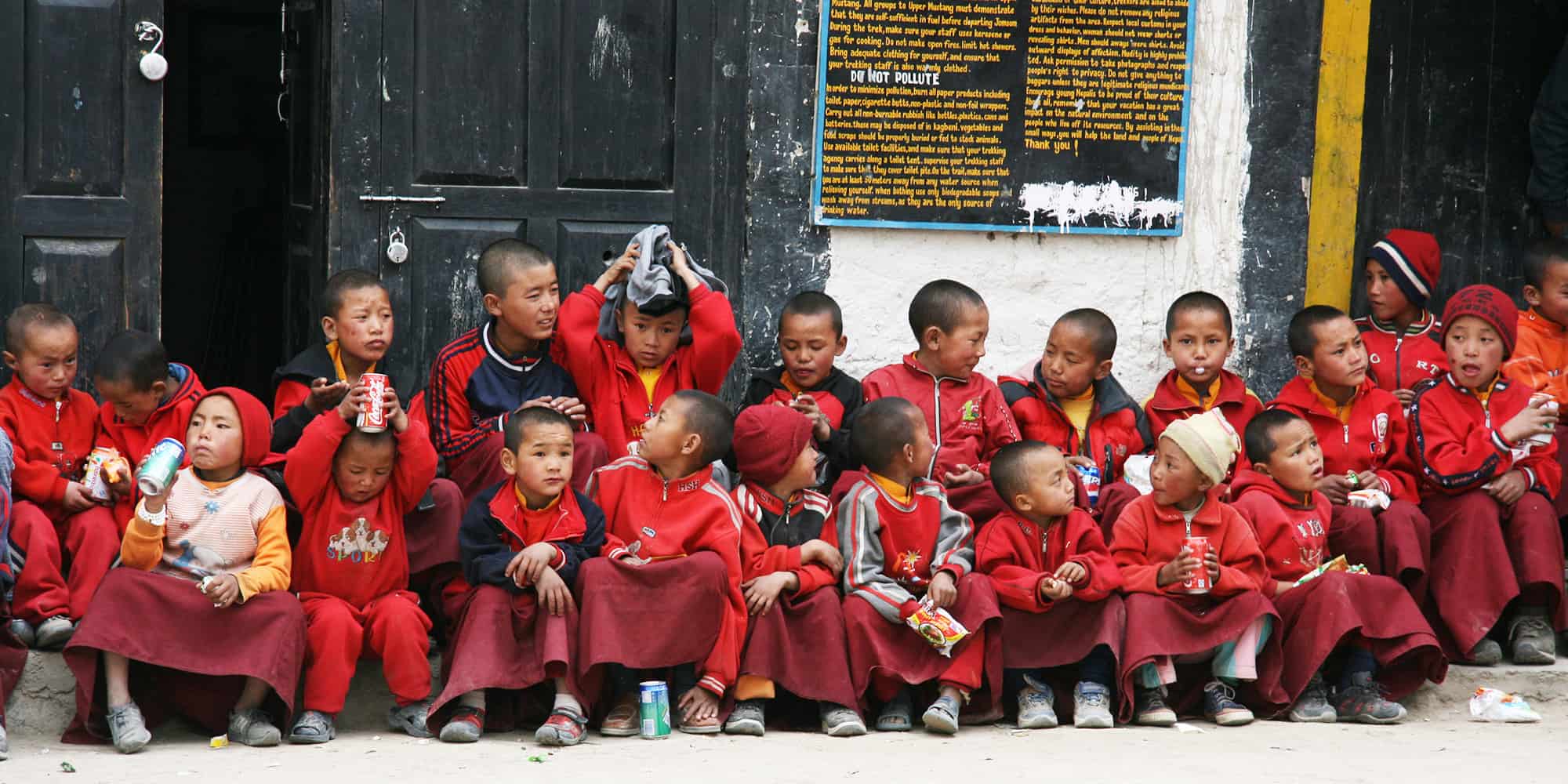 Everyone believes something... even it's nothing at all

The other major factor to consider when deciding to visit the Himalaya is the festival calendar. There are more than 365 festival days just in Nepal, so there is always something happening somewhere! Almost all Himalayan festivals and faiths are related to phases of the moon in some way and do not occur on specific Gregorian calendar dates.

It is a good idea to avoid travelling on some of the main festival days such as Dashain (aka Dasain, Dussehra) or Tihar, as transport systems tend to suffer from overcrowding and delays. You should also be aware that some festivals traditionally require the slaughter of a goat and/or payment of a cash amount, and that visitors are expected to contribute. If you are unsure of the potential impact of a festival to your plans it’s a good idea to consult with locals and be prepared for your plans to change a little.

NEPAL FESTIVALS: www.visitnepal.com or www.qppstudio.net (navigate to the Nepal page).

Nepal, Bhutan and India are a complex sacred landscape, full of Himalayan Festivals and Faiths

Over 85% of Nepali people are Hindu, a religion that dates back to 1500bc. Hinduism has thousands of deities, but there are three main gods: Brahma the creator, Vishnu the preserver and Shiva the destroyer. Most Hindus are Vaishnavites (followers of Vishnu) or Shaivites (followers of Shiva). Popular gods/goddesses are also Ganesha (the elephant-headed god who is the remover of obstacles), Laxmi (goddess of wealth), Saraswati (Brahma’s consort and goddess of wisdom), Hanuman (the monkey god who symbolises strength and protects against accidents), Kali or Durga (the blood-drinking consort of Shiva and goddess of change and death), and Krishna (an avatar of Vishnu), the blue-skinned cowherd who had a penchant for milkmaids and is usually depicted with his flute.

Hindus believe in reincarnation and that the circumstances of your rebirth are determined by your deeds in the present life. The caste system is an important part of Hindu culture in Nepal, but its influence is less noticeable in the major cities. The highest caste is Brahmin (usually priests or civil servants), followed by Chhetri (warriors and rulers), Vaisyas (traders and farmers) and Shudras (artisans). Below this are the Dalits (untouchables) who traditionally have performed menial tasks such as sweeping, butchering and tailoring.

Buddhism is the second most popular belief system in Nepal and is dominated by Tibetan monasteries, or gompas, of four major sects called Nyingmapa, Kagyupa, Sakyapa and Gelugpa. The Dalai Lama is the head of the Gelugpa sect and their gompas normally boast a large statue of the sage Tsong Khapa who re-introduced Buddhism to Tibet in the 14th century. The Buddha was born in Lumbini in the Nepal terai, the plains along the southern India–Nepal border, in 560bc as a prince, and renounced his worldly possessions to find the ‘middle path’ – the way to enlightenment not through suffering or excess, but by realising that desires lock people into the cycle of suffering and rebirth.

Although Buddhism does not have gods as such, their gompas are decorated with figures depicting certain good or bad characteristics, such as hungry ghosts with tiny necks who were greedy people in a former life, or Buddhas with particular characteristics, or scary-looking temple protectors to keep away evil spirits. Each sect has its own practices and traditions, and the Newar people have combined Hindu and Buddhist beliefs to form a complex religion called Newar Vajrayana Buddhism. The World Heritage listed temples of Boudhanath and Swayambunath are the main Buddhist sites in the Kathmandu valley.

You will frequently hear Buddhists chanting throughout the day, and especially while walking clockwise around a place of worship. The most popular chant is Om MaNi PadMe Hum, a common translation being, ‘Hail! The Jewel in the Lotus.’

The Bon religion was historically confined to Tibet and surrounding areas such as Dolpo, Sichuan, Yunnan, Bhutan and Assam, and is a combination of Buddhism with older animistic and shamanistic beliefs. Although many of its tenets melded with Buddhism, Bon is distinctly different in its day-to-day practices. There are very few Bon gompas remaining in Nepal; most of them are in Upper Dolpo. People who follow Bon are called Bon Po.

The most obvious differences between Bon and Buddhism are: Bon followers go around chorten (memorial or decorated cairns built on passes, ridges, or other significant spots) and monasteries counter-clockwise (keeping the object on their left side) whereas Buddhists keep the building on their right and go clockwise, the power symbol of Bon is a left-facing swastika (Hindus use a right-facing swastika), whereas Buddhists use the dorje (thunderbolt). The original Bon religion was mostly based on magic, spirits and blood sacrifice to propitiate the gods, who live in all natural things. Bon followers also chant throughout the day, the most common being, Om Matri MuYe SaLe Dhu, which means much the same as the Buddhist mantra.

The Teeji (comes from the words ‘ten che’, meaning the hope of Buddha Dharma) festival is a three-day ritual known as ‘The Chasing of the Demons’, which centres on a local myth that tells of a deity named Dorje Jono, who must battle against his demon father (Dorje Sonnu) to save the Kingdom of Mustang from destruction. The demon father wreaked havoc on the Kingdom by creating a shortage of water (a precious resource in this very dry land), which caused all sorts of disasters including famine and animal loss. Dorje Jono eventually beats the demon and banishes him from the land, and the community is saved from a plague of misfortunes. Of course, the local population celebrates their salvation, as water will be plentiful again, and the balance and harmony of day-to-day life is restored.

Over three days, the lamas from Chhoede Gompa enact battles and folklore scenes through intricate mask-dances, which culminate in a fireworks and musket-firing melée outside the main gate of the city. Each of the three evenings, there is a cultural programme in the centre of the city, where young and old come to enjoy dance and singing performances. Teeji is a lively, vivid and amusing celebration and reaffirmation of a myth said to have been bought to Mustang by Padmasambhava in the 8th century. Apart from the symbolic ritual of cleansing the Kingdom, Teeji coincides with the end of the dry winter/spring season and ushers in the wetter monsoon season (the growing season in Mustang). So for everyone in Mustang, it is a ‘must-see’ event, where locals dress up in their finery and have a good time.

The GHT is a HUGE challenge and it’s not every day that you get to do something extraordinary, and just maybe you could take the opportunity to turn your GHT into something amazing for other people to?

Time to think if your GHT could GIVE SOMETHING BACK…