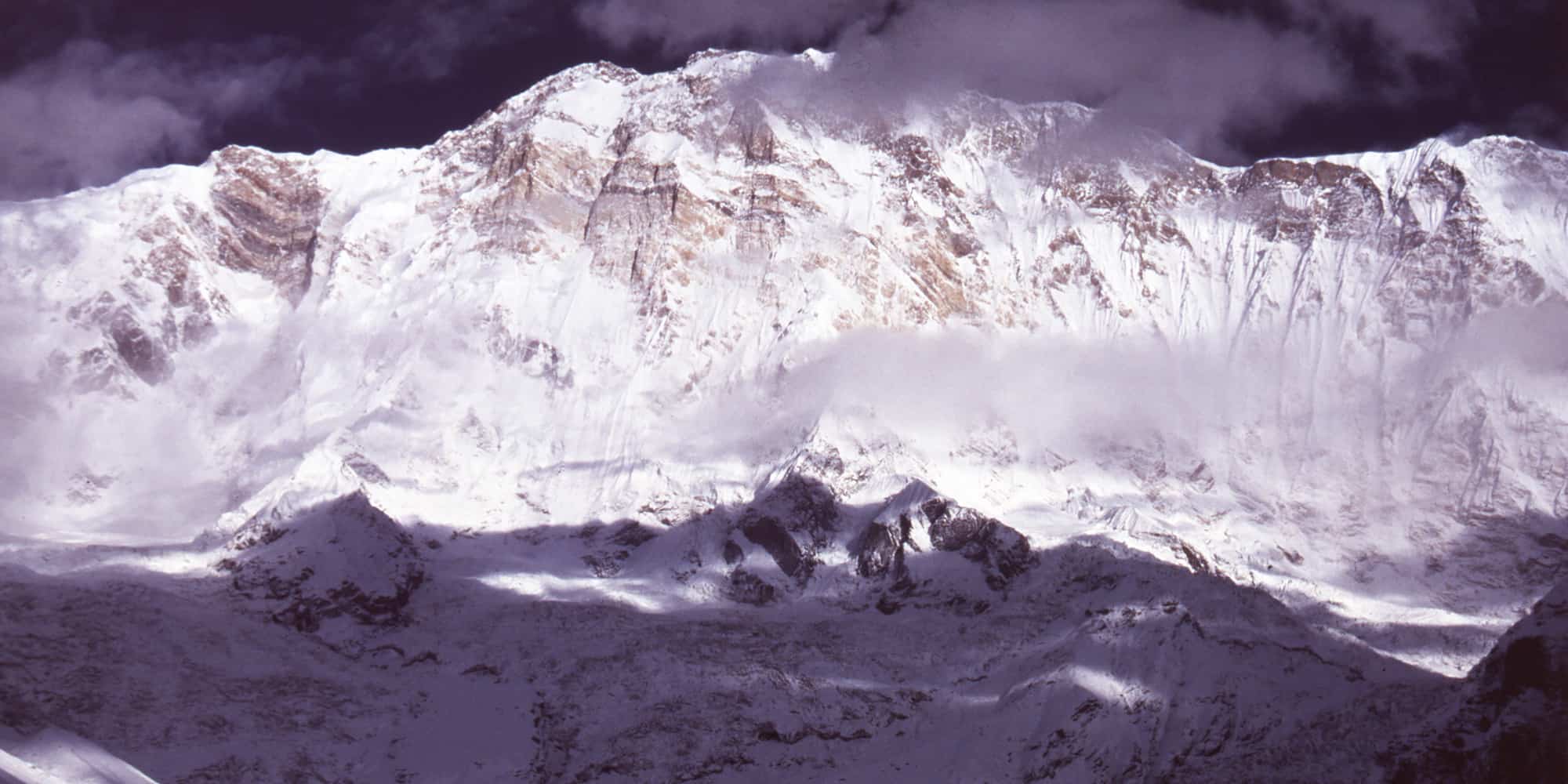 Easy, comfy and spectacular! What more do you need?

The Annapurna Sanctuary is a fabulous mountain amphitheater with magnificent views of the surrounding peaks; en route there are relaxing hot springs, lush forests, fun-loving Gurung communities and many wonderful extension options if you have a little more time.

When to Trek to Annapurna Sanctuary?

Lying to the south of the Great Himalaya Range, the Annapurna Sanctuary region has a typical monsoonal climate: a long rainy season from June/July through to the end of September and then a period of stable weather through to mid-January. Later winter storms frequently fill the Sanctuary with large amounts of snow, often burying the teahouses completely. The spring thaw is in March and the trails soon re-open and remain so even through monsoon.

The teahouses along the Annapurna Sanctuary trail remain open for almost the entire year, however in recent years avalanche danger (resulting in deaths in 2020) closed the trail in March. If you want to trek then please be sure to check weather forecasts and local information every day!

All of the southern ridges and valleys of the Annapurna ranges are well serviced by teahouses and local lodges, so along the Annapurna Sanctuary trails there are excellent teahouses. There are some remote and spectacular day and side trips that require camping equipment if you want to explore.

The Annapurna Conservation Area Project (ACAP) is the largest protected biodiversity area in Nepal. Local community groups are pushing hard for improved services and support from Kathmandu, and have invested heavily in tourism facilities. The more tourists are attracted to the area, the more value local communities will feel their natural environment has to offer, and therefore, the more likely they will help to preserve their region.

Please use local facilities and services where you can and try to encourage sustainable practices at all times.

The Annapurna Sanctuary has remained relatively unchanged since the first trekking boom in the mid-1990s, probably because local investment concentrated on the Circuit route and there are limited high trail combination options. It’s easy to link this trek with Poon Hill and/or Khopra Ridge (Khopra Danda) via Tadapani, and to the east of Landruk you could connect to the Mardi Himal trails and even go cross country as far as Siklis and the old (and high) monsoon route over the Namun Bhanjyang to Timang. 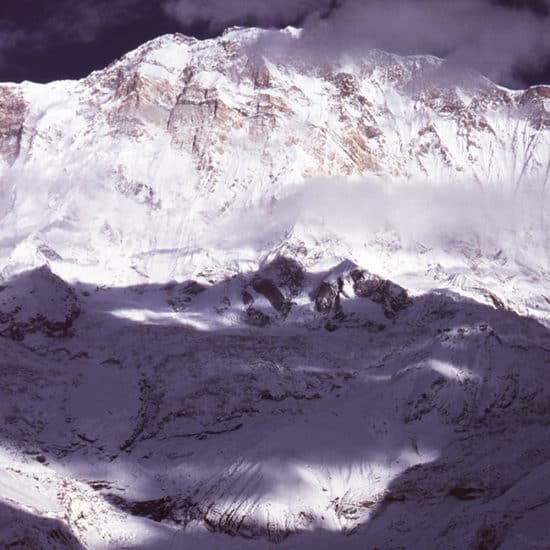 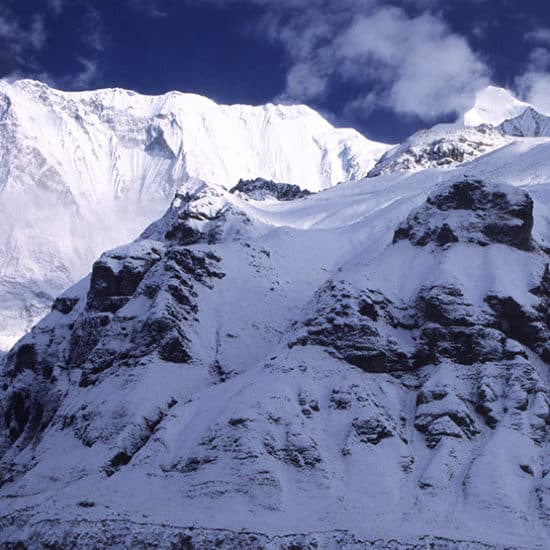 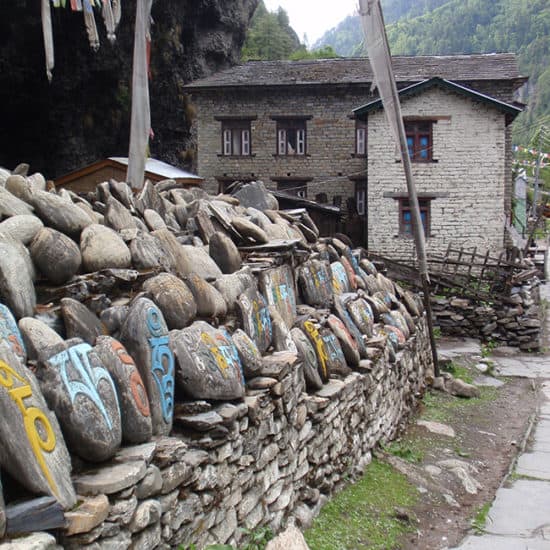 There are many taxis plying the new road route from Pokhara to Kimche (3hrs’ drive), or you can take a bus to Birethanti (1050m) and begin your trek along the road route (add an extra 4½ hours of walking time). To begin at Birethanti first cross the metal bridge to the true right bank of the Modi Khola and register at the ACAP checkpost. The trail heads north from Birethanti, up the Modhi Khola valley, following a rough dirt-road route. Currently the road ends at Kimche (1640m) where you then follow an impressive stone-paved trail, climbing all the way to Ghandruk (1940m, 3hrs). This village is an amazing example of stone-work and is worth spending a day exploring. Spread over the entire hillside there are views of the Annapurna range which are best appreciated from one of the many bakery cafés in the village. Note: It is easy to link Birethanti and Ghandruk with trails to Poon Hill, adding another 2 days to this itinerary, see Poon Hill and Khopra Ridge
2

There are a number of route options between Ghandruk and Chhomrong. The fastest and most popular is via Kot Danda and Kimrong. Both the two other routes descend into the Modi Khola valley (via New Bridge and/or Jhinu) and take considerably longer. The New Bridge option is only worth considering if you are not going to return on the Chhomrong–Landruk route (see day 7), which passes the hot springs. To reach Kot Danda, follow the main trail out of the north-western end of the village, which heads to Tadapani. To your north rises the impressive bulk of Annapurna South and the dramatic Machhapuchhare. Once you leave the village it is easy to see Kot Danda on a ridge across a small valley and the trail route as it branches away from the Tadapani trail. It’s a pleasant stroll for 2 hours to Kot Danda where there are some tea shops to sit and enjoy the view. It is a steep downhill to Kimrong (1860m, 45 mins) where groups often stop for lunch. A steady climb for 1¼ hours brings you to Taulung (2180m) and Chhomrong (2170m) is less than an hour further.
3

Descend a stone stairway and cross a bridge to the true left bank of the Chhomrong Khola and then climb through some small terraces to Tilche (2010m, 40 mins). Beyond the village, enter a bamboo forest and traverse above Bhanuwa and enter the Modhi Khola valley, which forms a striking V shape ahead. The trail climbs to the last permanent settlement of Sinuwa (2360m, 35 mins) and continues through oak and rhododendron forest interspersed with large stands of bamboo. After another 45 minutes you should reach Kuldhigar (2540m), where there are a few teahouses and an ACAP post. From here onwards, sections of the valley are affected by avalanche debris falling from the flanks of Hiun Chuli; you should check with ACAP staff if the trail is clear and safe. A short climb is followed by a steep descent on a well-prepared paved track to Bamboo (2310m, 30 mins), where the trail now deteriorates with many tree roots and slippery sections forcing your pace to slow. Three small bridges cross tributaries en route to Dobhan (2600m, 1¼hrs), where there are a few teahouses. From Dobhan the forest becomes more impressive with large rhododendrons covered in Spanish moss and pockets of orchids. The locals believe that the god Baraha protects the Sanctuary. Accidents are frequently explained as the unfortunate outcome of upsetting him by taking meat or eggs beyond a small shrine you’ll find opposite a pretty ‘weeping waterfall’. In an hour you reach the village of Himalaya (2920m), so named because there was initially a single teahouse here, called Himalaya, and the village sprang up around it once the trek became popular.
4

Continue to climb through dense forest to a large rock overhang, called Hinku Cave (3170m, less than an hour), once the site of a teahouse. Deurali (3230m, 45 mins) can be seen ahead, beyond another avalanche-prone area. The valley broadens and a fine birch forest fills the far bank before you pass a small snow cave that has been slowly melting for years. Two obvious rock pillars mark the ‘gateway’ to the Sanctuary, which suddenly opens out to broad grassy slopes and a series of teahouses at MBC (3700m, 1½hrs). The last expedition to climb this sacred mountain was in 1957; out of respect, it stopped short of the summit. Many trekkers begin to feel the effects of altitude at MBC, so it is a good idea to initially rest and enjoy the views of Machhapuchhare, Gangapurna and Annapurna South on arrival. If you are still feeling symptoms of altitude sickness later that evening or the following morning, you should rest for the day or consider descending to Himalaya.
5

The trail climbs ancient moraine, now covered in grass, to the west of MBC. There are many trails that wind slowly upwards to ABC (4130m, 2hrs), some on the edge of the moraine for views of the Annapurna South Glacier, others towards the lower slopes of Hiun Chuli (giving a better perspective of the Sanctuary). There are four teahouses at ABC, which was the site for the 1970 British Annapurna Expedition, and a day spent wandering further up the valley or along the edge of the nearby moraine is a great way to absorb the majesty of the Himalaya.   Side trip from Annapurna Base Camp (ABC) For those who are acclimatised and have the time, there is an excellent viewpoint on the far side of the Annapurna South Glacier and above the Tent Peak Base Camp. From ABC descend to the glacier and look for a trail marked by cairns, which crosses the glacier to a large gully (beware of rockfall!) cut by a stream through the moraine on the far side of the valley. Climb to the left of the gully to a grassy moraine and head west as a small trail winds around the base of some buttresses. Before the rim of another deep gully (4350m, 1½hrs), climb straight up the face of a buttress which soon begins to level to a point where you can cross a small stream to the west bank and ascend a broad grassy slope that leads up to a viewpoint (4890m, 2hrs) of the entire western basin of the Sanctuary. To the east is Tent Peak (Tharpu Chuli), to the north-east is Singu Chuli, to the north is Khangsar Kang (Roc Noir) and to the west is the massive face of Annapurna I (8091m). The southern horizon is filled with Annapurna South and Hiun Chuli. Your return to ABC will take 2¼ hours.
6

Backtrack along the same route to Bamboo (2310m, 4½hrs), or if trail conditions allow continue on to Sinuwa
7

Reach Sinuwa (2360m) in one hour from Bamboo and continue to Taulung (2180m, 1½ hours from Sinuwa). At the end of the village the trail forks: the right leads back to Kimrong, but take the left trail, which descends steeply to Jhinu (1780m, 45 mins). Before the track swings sharply west (into the Kimrong Khola valley) there is a small sign for a hot spring about 40 minutes to the north in the Modhi Khola valley. If you don’t want a hot bath, continue along the trail as it descends to a bridge, which you cross to the true right bank of the Kimrong Khola and then climb the far bank to Samrung (1750m, 30 mins). After Samrung, descend to the Modhi Khola on a trail heading towards New Bridge (1340m, 20 mins). Just before the final descent to the bridge there is a sign to another hot springs down a scrambly track to the north of the bridge. Cross the bridge to the true left bank of the Modhi Khola and pass through some small villages before a short climb to the large Gurung village of Landruk (1565m, 1¼hrs).
8

The trail now climbs an easy gradient sometimes on soft ground and sometimes on stone paving to Pothana (1890m, 2½hrs), which straddles the Manjh Danda ridge. There are fine views of Machhapuchhare and the Annapurnas to the north from along the next section of trail, making this one of the best final days on a trek in Nepal. Descend from Pothana along a large ridge trail to Dhamphus (1650m, 1hr), before a final steep descent through forest to the taxi stand and car park at Phedi (1130m, 45 mins), which is only a short drive from Pokhara. Note: From Landruk and Pothana there are dozens of trails heading east and towards Pokhara that can add a touch of delightful cultural immersion to the end of this itinerary. 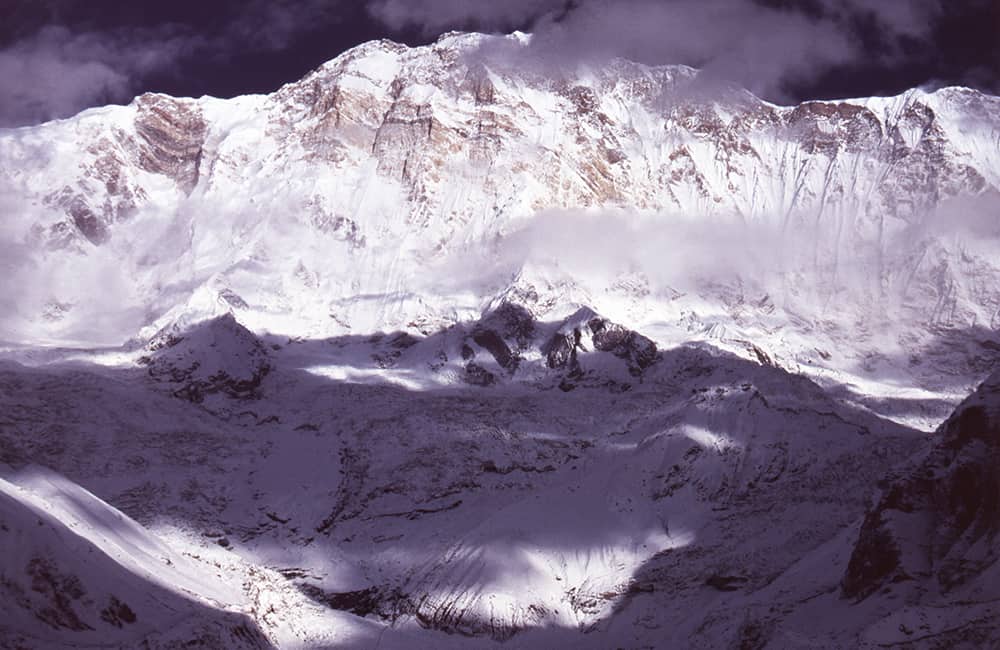 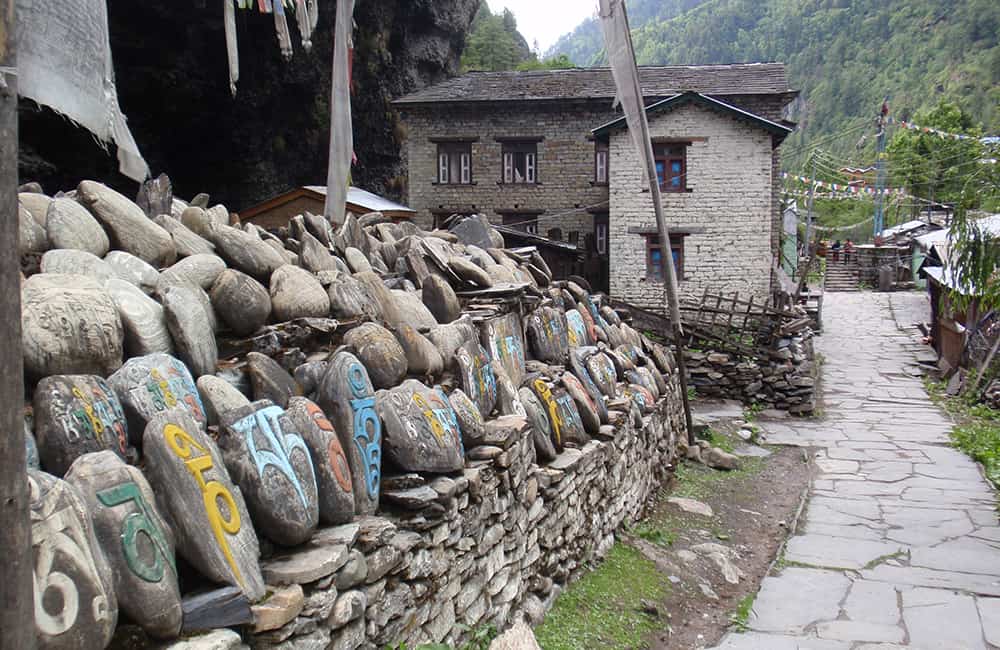 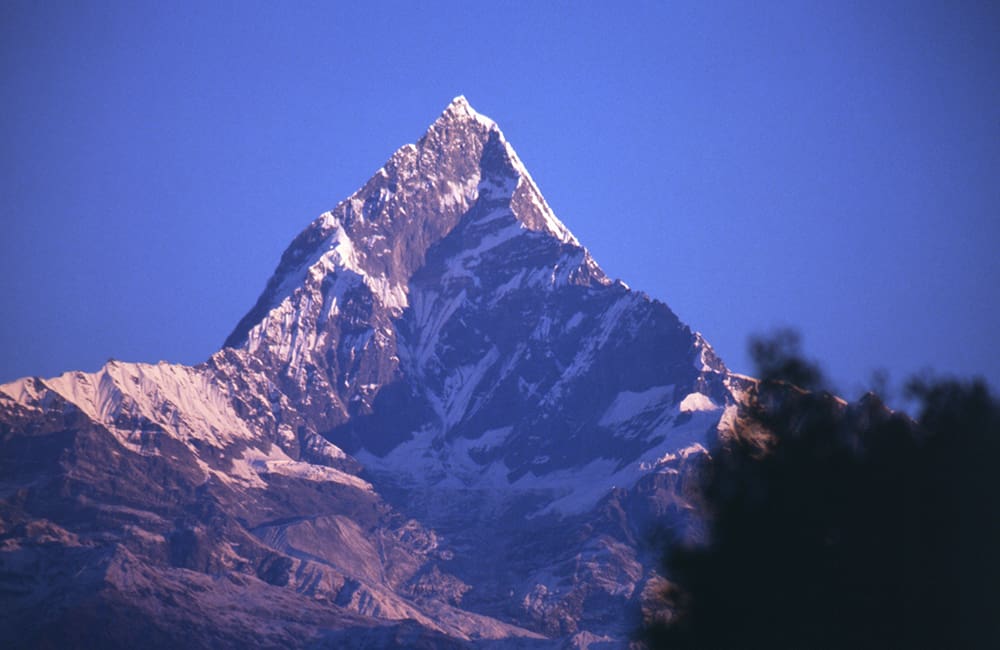