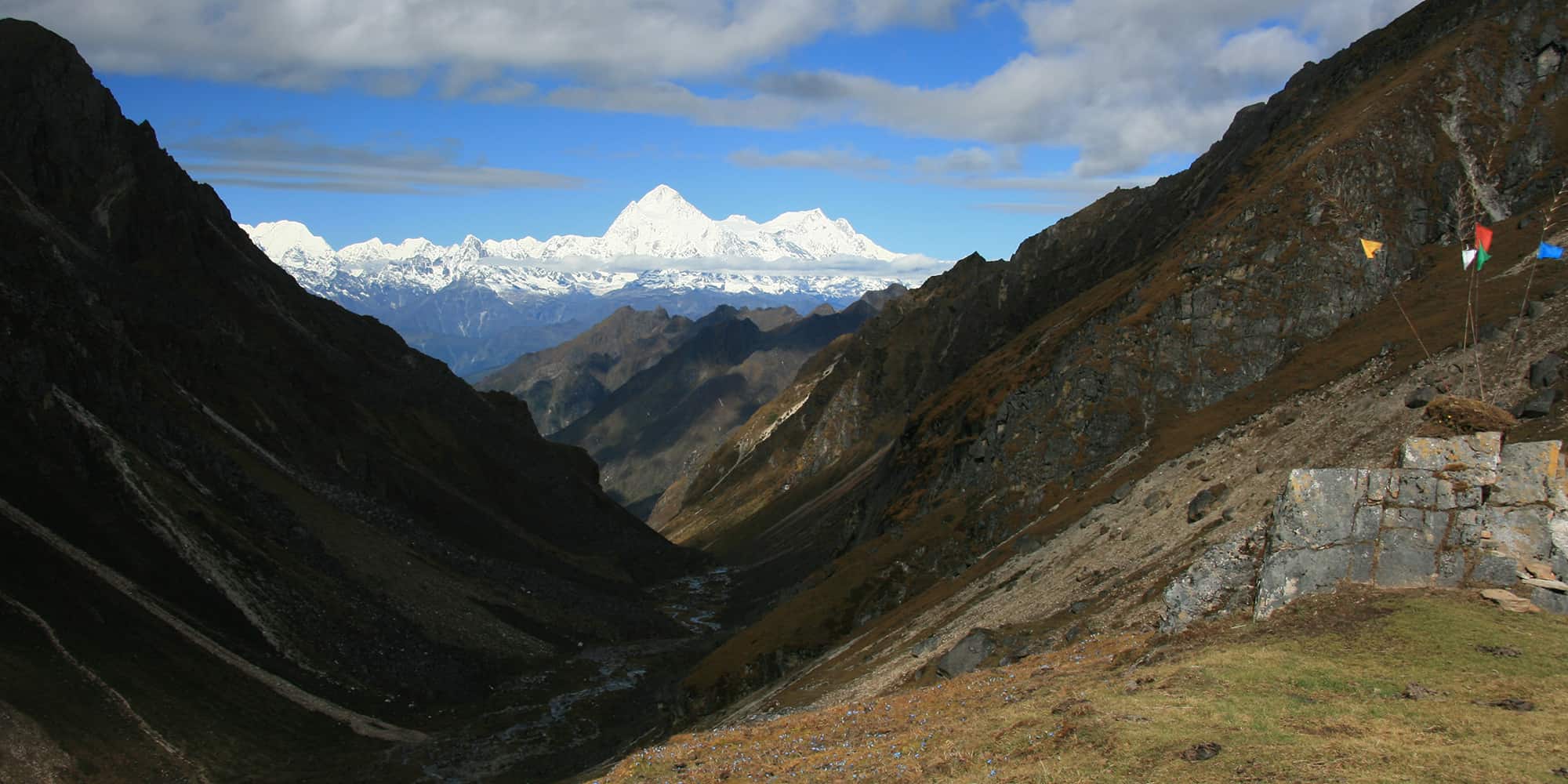 The far eastern himals of Nepal have some truly amazing Kanchenjunga and Makalu Treks! Wild, remote and some of the most spectacular trails in the entire Himalaya – certainly the highest passes and biggest mountains! Nearly 50,000 people go to the Everest region each year, in contrast, barely 1,000 people will visit these two trekking gems combined!

Both Kanchenjunga and Makalu Trekking areas are perfect for those wanting an authentic trail experience that avoids the crowds of foreigners on the main trekking routes of Everest, Annapurna and Langtang.

Lush rhododendron forests, dramatic mountain vistas, communities that abound in folklore and the third highest peak in the world, Mt Kanchenjunga, all combine to make this a paradise for trekking off the beaten path. Located in far-eastern Nepal, on the border with Sikkim, Kanchenjunga Conservation Area (KCA) was one of the first areas of the Himalaya to be explored in the 19th century, and yet it remains largely unvisited by tourists outside of October-November.

The Nepal side of the Kanchenjunga massif is split into three distinctive trekking regions:

Along the higher trails, communities are isolated from the lower valleys by a maze of ridges and peaks. So, treks to this region are a little longer than those to the most popular areas, but spending a little extra time here will prove more than worthwhile as you get to explore one of the wilder corners of the Himalaya.

Most trekkers arrive at Taplejung (by road via Ilam or the Suketar airstrip), which attracts a lively combination of Sherpa, Limbu, Rai and Gurung people, especially for the Saturday market. However, if you are trekking to Phalut, on the border with India, your trek will begin from the jeep road-head at Chyangthapu (Phunlading). Note that you will need a special permit from the police station here to trek to the border and stay at or near Phalut.

The KCA is the first region in Nepal to be managed by local communities and this has so far proved very successful along the main trail, but is yet to be fully effective in remoter valleys. Trekking is still in its infancy in much of the Kanchenjunga and Makalu regions, and although every community has teahouses, you shoudl tread lightly and encourage sustainable practices wherever you can.

As at August 2019, the trekking permit fee for the Taplejung District (Kanchenjunga Region) and Sankhuwasabha District is US$10 per week per person for the first four weeks and US$20 per week thereafter. Plus the Kanchenjunga National Park entry fee of NRs 2000 per person (foreigners), NRs 500 (SAARC nationals) and NRs 100 (Nepali nationals).

Neighbouring Kanchenjunga, the Makalu region is known for being wild and high, and has some of the most dramatic mountain scenery in the Himalaya. Sometimes described as the Yosemite of Nepal, but with glaciers on top of the mountains, this region offers unbridled wilderness to explore. Sandwiched between Kanchenjunga and the Solu-Khumbu (Everest) regions, the massive Makalu-Barun National Park and Buffer Zone rarely sees more than a few hundred trekkers each season.

Dozens of peaks surround the Honku Khola and Honku Basin in the west of the National Park, including the popular Mera Peak (6461m) and the infamous Amphu Labsta pass. To the north, Mt Makalu (8468m) straddles the border with Tibet and is reached via the Barun Nadi, which flows east to join the Arun Nadi in Lhomi country. An outgoing mix of Sherpa and Rai communities populate the valleys in the southern Buffer Zone; the centre of the Park is home to many endangered species including snow leopard and red panda but is not inhabited by people.

Most trekkers begin their adventure from Tumlingtar, a sprawling Rai settlement, and then drive along a ridge-top dirt road to Num (via Khadbari), before crossing the Arun Nadi. The next few days are tough as you climb up and over the Khongma Danda, but the views and cloud forest adorned with orchids are ample reward. You then descend to join the sparsely populated Barun Nadi valley to Makalu Base Camp.

Intrepid trekkers will enjoy the route between Makalu Base Camp and Chyamtang, along some wild and remote trails parallel with the Tibetan border. Also in this chapter is a description of one of the highest and most challenging trekking routes in the world, from above Makalu Base Camp and across some technical alpine passes: the Sherpani Col (6180m), the West Col (6190m) and Amphu Labsta (5845m) to the Solu-Khumbu (Everest region).

For those who prefer to avoid the rigours of high-altitude passes, there are multiple trails from Tumlingtar and Khadbari that connect to Chyamtang, Lukla and Taplejung. Passing through the Makalu-Barun Buffer Zone, both cultural-based village-to-village homestays and more remote wilderness routes are options, and almost certainly without meeting another trekker!

A recent burst of teahouse-building activity means the trail to Makalu Base Camp has a ready-made stop for each day/night of the trek. Facilities and food are basic, and a little on the expensive side for Nepal, but it does mean you can avoid carrying tents and cooking equipment during the main trekking seasons.

Makalu-Barun is the second largest of Nepal’s National Park and Buffer Zones. Local herders are permitted to graze animals and are encouraged to take an active role in conservation projects.

Highest Point of the GHT is the West Col, 6190m

Nepali, some people speak some English