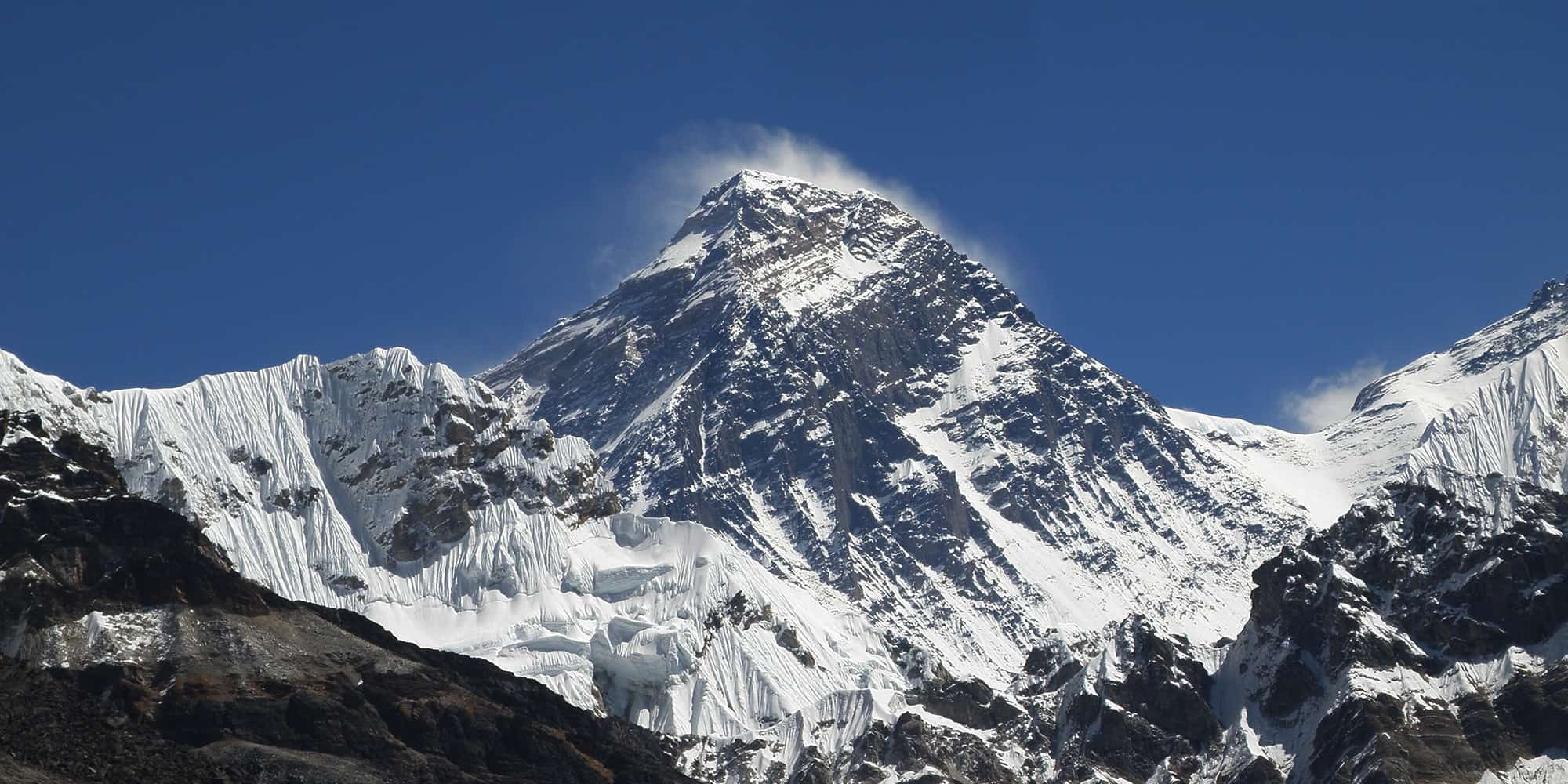 The highest mountain in the world will always draw a crowd

Everest and Rolwaling Treks are a mix of the most-dos and the complete unknowns of Nepal’s trekking areas! Everyone has heard of Mount Everest (aka Sagarmatha or Chomolungma), the highest mountain in the world at 8848m and 50,000 people trek to Everest Base Camp every year. But very few people have heard or visit the neighbouring region of the Rolwaling to the west of Thame. If you have the time, try to combine both areas and create a challenging GHT trek that crosses the Cho La, Renjo La and Tashi Labsta – now that’s something to tell the folks at home about!

Mt Everest, known as Sagarmatha to most Nepalese and Chomolungma to the local Sherpas, has become one of Nepal’s premier trekking destinations. The proliferation of comfortable teahouses (many with en suite rooms) and well-maintained trails accommodates tens of thousands of tourists each season. The region is popular for good reason; some of the most spectacular and beautiful mountain scenery in the world combines with the famous friendliness and hospitality of the Sherpa people to make a visit a must for any walker.

The Everest Region, known locally as the Solu-Khumbu, fans out into a series of impressive glacier-filled valleys above the main trading centre of Namche. The eastern side of the fan includes the main trail route to Everest Base Camp (EBC) and the viewpoint of Kala Patthar (see Everest Base Camp, Kala Pathar, Cho La and Ranjo La Trek), along with the Chukhung valley that leads to Amphu Labsta (see Sherpani Col, West Col & Amphu Labsta see Makalu Base Camp Trek for more info) and the popular trekking peak of Imja Tse (Island Peak). The centre of the fan is the Gokyo valley, which contains a series of turquoise glacial lakes beneath the impressive bulk of Cho Oyu (8201m). To the west is the less frequently visited Bhote Kosi valley system that leads first to Thame and then west to Tashi Labsta (to combine and make an Everest and Rolwaling Trek) or north to Nangpa La, a pass used by Tibetan traders and refugees. The Everest Passes Trek links the main valleys of the Solu-Khumbu by following a route to Everest Base Camp and then over Cho La to Gokyo and Renjo La to Thame before returning to Lukla.

Schools and programs operated by the Hillary Himalayan Trust, started by Sir Edmund Hillary, are famous for kick-starting the economy of the Solu-Khumbu region. The key to the success of its projects is the involvement of locals. Sir Edmund believed locals could help themselves if given sufficient opportunity and resources. The Trust mostly provides funds and the villagers provide land, materials and labour. This approach means that the villagers ‘adopt’ the projects and take pride in maintaining and further developing schools, hospitals and bridges all over the Solu-Khumbu. For more information see, www.Himalayantrust.co.nz.

Getting to Everest Base Camp

The vast majority of visitors to the Solu-Khumbu now fly in and out of Lukla rather than do the 4- to 5-day trek from Jiri. Beyond Lukla, Namche offers a convenient and comfy acclimatisation stop and the opportunity to get to know the local Sherpa people a little better. Khumjung and Khunde are above Namche, and this is where Sir Edmund Hillary began his pioneering work with local development projects. The famous Tibetan Buddhist gompa at Tengboche is only a day further, and then the highest settlements of Pheriche and Loboche lead you to Gorak Shep, a staging-post for both Everest Base Camp (where there isn’t a view of Mt Everest’s summit) and the viewpoint of Kala Patthar (where there is). A popular side trip is to Chukhung, or over Cho La to Gokyo, which for many is a worthy destination in itself. Renjo La offers perhaps the best viewpoint of the entire region and leads to the Thame valley, which can feel eerily remote compared to the main trails.

Everest Base Camp Accommodation and Permits

The ‘Khumbu’ in Solu-Khumbu refers to the higher-altitude areas of the Solu region, which actually extends far to the south. The ‘lower’ Solu is rich in Sherpa culture, sacred sites, fantastic viewpoints and not another tourist in sight! Dozens of trails are open for most, and sometimes all, of the year, and all are worth an unhurried exploration.

Sagarmatha National Park was declared a World Heritage Site in 1979 and has a comprehensive management structure. Use of firewood is prohibited and locals rigorously monitor environmental protocols.

View of Everest From the Renjo La

Often overlooked by tour companies, there is a culturally diverse and very enjoyable trekking region just a day’s drive to the north-east of Kathmandu, known as Rolwaling. Whether you want high passes, mountains and glaciers, or charming villages amid old-growth forests, this region will both surprise and delight any trekker.

Although the name, Rolwaling, specifically applies to a river that is fed from the glaciers around Tsho Rolpa lake, it now includes all the valleys, hills and ridges as far west as the Arniko Highway (the road to Lhasa from Kathmandu). To the east of the region is the Solu-Khumbu, to which it is linked by the formidable Tashi Labsta pass (full route from the Arniko Highway to make an Everest and Rolwaling Trek over Tashi Labsta is a cracker!). The Great Himalayan Range in Nepal comes to an abrupt stop at the Gaurishankar Himal as the Tama Kosi cuts through the mountains. Beyond, to the west, are Tamang, Gurung and Sherpa communities of the Langtang and Helambu Treks, as well as some rarely explored rhododendron forests that are home to red panda and black bear.

A road is being built up the Tama Kosi valley to Tibet, which is now increasing access to Rolwaling as a whole. Another road from Barhabise to Bigu Gompa is open but often blocked by landslides. A good place to start exploring the eastern Rolwaling is The Last Resort on the Arniko Highway, where you can follow a series of ridges up to Tinsang La. From here you traverse around the Chilingkha Danda through Sherpa, Tamang and Gurung villages to Laduk. It is possible to travel by bus from Kathmandu to Singati, and reach Laduk in one day. The most popular trail in Rolwaling is a high alpine route over Tashi Labsta (see the Rolwaling and Tashi Labsta Trek) that heads from Laduk to Na via Simigaon and takes six days (note that you can take a jeep from Singati to Chetchet to save two days). For the truly adventurous, there is a more serious mountaineering route over Yalung La before climbing the Trakarding and Drolambu glaciers to Tashi Labsta. Lower trails head from Laduk to Jiri via Yarsa and Sarakapti.

The Rolwaling is now protected as part of the Gaurishankar Conservation Area and as you cross the Tashi Labsta, the Sagarmatha National Park, where your permits will be checked at Monjo. As at August 2019, the trekking permit fees for the Dolakha District / Gaurishankar & Lamabagar areas are US$10 per week per person. Plus the Gaurishankar Conservation Area entry fee of NRs 3000 per person (foreigners), NRs 1000 (SAARC nationals) and NRs 100 (Nepali nationals).

Nepali, some people speak some English 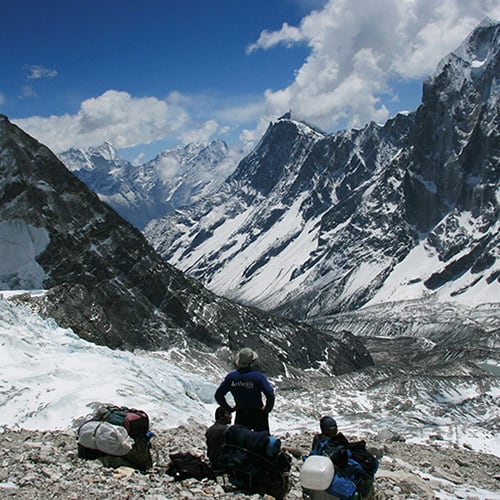 Diverse cultures, picturesque villages and one of the most challenging passes in the Himalaya. A trek through the Rolwaling region will delight, surprise and provide a genuine physical test for even the most experienced trekker.
15-25 days 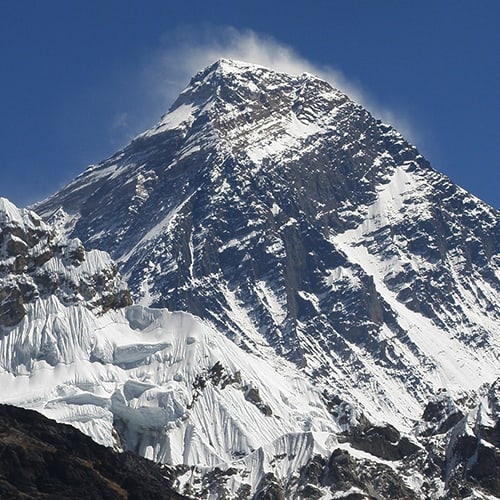 Everest Base Camp and Passes

This adventure has it all! The Everest Base Camp and Passes Trek includes amazing views, Sherpa culture, if you only visit Nepal once, this is the trek to do!!
15-25 days