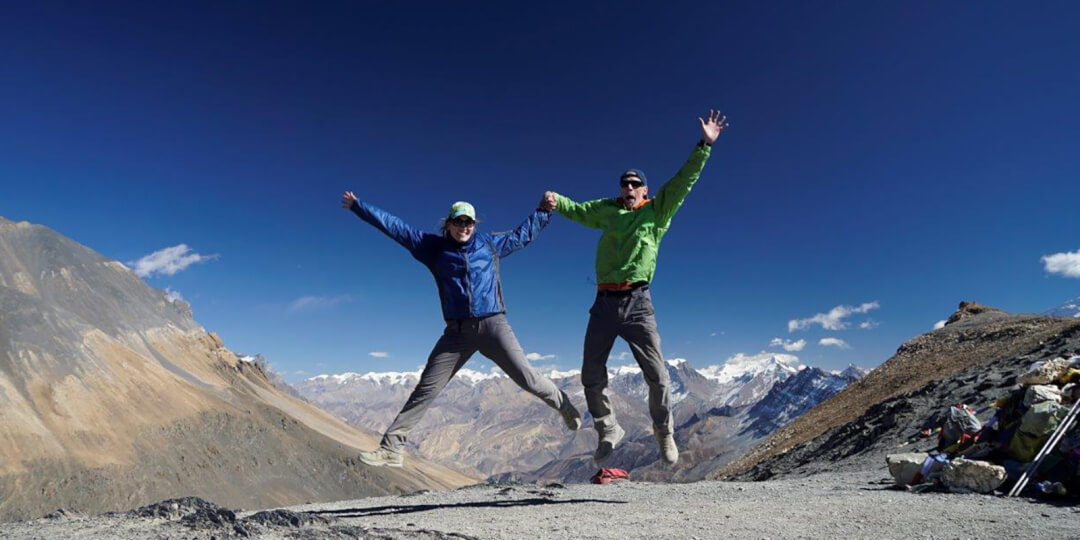 Love, mountains and much, much more... The idea of trekking the Great Himalaya Trail was brought up between us in 2017, and we decided that not only could we realise our dream of getting married, but we can also realise our dream of trekking the GHT. The planning stage felt daunting – hundreds of kilometres of trail and sketchy information. But we soon realised that the only way we can achieve this goal is to take the first step of the trek and the kilometres will gradually add up.

So just weeks after our wedding in 2017 we set off to far western Nepal, aiming to complete the western half of the GHT, and return in 2018 to walk the eastern half. We were self supported and had arranged guides for specific sections where needed.

Our impression of far west Nepal really is that it is ‘The Wild West’ – it was evident that few tourists venture to these areas. We quickly realised that the challenge we set ourselves was equally mental as much as physical, coping with the hardships and having the will to keep going.  After about two weeks into the trek our bodies had started to get used to carrying heavy backpacks up and down mountains and we were getting into the swing of things. Memorable things such as being given fresh delicious apples by a boy we met on the trail, and the older couple at Jogimara offering us their room for us to sleep remind us of the kindness of the Nepali people.

Our planned route took us to beautiful Rara Lake and to Phoksundo Lake – the amazing blue water surrounded by the peaks make Phoksundo one of our favourite places in Nepal.

We traversed the remote Dolpo sections with it’s barren and dry landscape and ancient villages seemingly untouched by many western influences.

In some cultures tradition calls for a newlywed husband to carry his wife over the threshold of their home, but our version of this was where Matt carried Anna on his back several times across an ice encrusted river near Chharka Bhot.

The remainder of our 2017 Western GHT was easier going on the well trodden paths of the Annapurna Circuit and Manaslu Circuit, even though we were going against the general flow of trekker traffic. After a month of trekking in the Far West that rarely sees any tourists we enjoyed the menu choices at the Annapurna trekking lodges, and meeting other trekkers at the lodges. We were jubilant for having completed the western half in 2017, and it gave us the confidence that we could complete the entire GHT.

In 2018 we returned better prepared from our experience in 2017, we felt compelled to complete our GHT journey.

Starting in the monsoon season, we trekked in the central region for two weeks then flew to the far East and trekked to Kanchenjunga BC – the most eastern point of our GHT.

Lumba Samba pass revealed the spectacular view of Everest, Lhotse and Makalu, with Kanchenjunga on the other side. Once again we faced various challenges physically and mentally, a significant one that we hadn’t faced before was the areas of leeches. Combining the leeches with rain and significant back pain tested our resolve and we really needed each other to keep going.

We joined our guide and porters at Makalu BC to cross the three high passes to the Khumbu. This section was wild, though we were prepared by having trained with ropes and crampons back home. We made good progress through this section despite the altitude making both of us feel rotten at various times. Camping on the ice of the glacier below West Col with grand views of Baruntse is a campsite we won’t forget!

In the Khumbu, we were back in luxury with the comfortable lodges and choices on the menus. We had to adjust our plans of crossing Tashi Labsta after not being able to find a suitable guide and being warned of recent deaths on the pass.  So as things are on the GHT, plans need to be flexible and so we adjusted ours and kept on trekking, and finished at our end point over a week later.

Looking back, our GHT trek was an experience of a lifetime and an incredible way to spend our honeymoon. The advantage of spreading our trek over two years was that we could break the trip into achievable blocks, we were better prepared in 2018 from our experience in 2017, and we had 10 months recovery between the trips.  We were very happy to have completed our GHT trek, and look forward to exploring more of the Himalayas in the future. We’ve discovered steep trails are a veil to the beauty and the allure of the Himalaya, revealing itself to those who dare take on the challenge and immerse themselves. 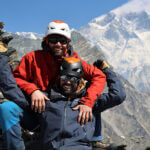 Some Practical Tips for GHTers